NOTICE: This content was originally posted to Google+, then imported here. Some formatting may be lost, links may be dead, and images may be missing.

Ramblings on the economics of supporting specific Android versions

In my last post I stated Gingerbread was now pretty much dead to me, due to (finally) dropping below 20% marketshare. There have been a lot of comments, some of which public on G+, and surprising amounts via private channels (private posts, email, Twitter DM, etc) - please stop doing that.

Of course, you need to keep your existing userbase in mind. You don't just drop Gingerbread support from existing apps without good reason, this could alienate and anger users, which is to be avoided if at all possible (though every change you ever make will piss someone off).

One recurring comment is that even though the marketshare of Gingerbread is now less than 20%, that still equates to millions of (potential) users. This is obviously a true statement, but still largely irrelevant for consideration of future development.

Before elaborating further on that statement, let me get some other things out of the way.

My data is skewed

The data I will present below is based on user and revenue numbers of both root and non-root apps.

However, even most of my non-root apps are fairly technical in nature, and will thus favor users who are more likely to have a more recent Android version. Just to illustrate - my non-techy girlfriend's phone is still running Gingerbread, so I have no doubt the numbers will be different for Facebook and the likes.

On the other hand, some of the apps I'm basing these numbers on have actually been around since the Gingerbread days, and thus will probably see relatively more Gingerbread users than an app that is released today.

Also, one thing I hadn't really noticed before coming up with this post is that it isn't easily possible to split revenue per Android version when In-App Purchases are used (as opposed to the paid version being a separate package) ... unless I've missed something.

When do people get apps?

As I've been building apps for a while, I have sales figures going back quite a while - all the way back to when Windows Mobile was big-ish and nobody had even heard of Android yet. I've learned many things over the years, here is a very obvious yet important one:

People are most likely to download and/or buy your app when they have just gotten a new device, as they will be actively looking for apps - something the average user rarely does!

If you move a large number of apps it may thus be economically viable to pre-order flagship devices as they are announced, to make sure the most important apps in your portfolio work (update them as needed) - before the masses hit the device and you miss this important moment. This is of course usually more important for root apps and apps that otherwise do things with Android that Google may not have initially intended, as they are more likely to break than the average app you find in Play, but even in the latter case it may be worth your while.

More importantly for this specific post though, is that people getting new apps when getting a new device is one of the major reasons that revenue generated by sales on the latest Android versions is generally positively disproportional to the overall marketshare of those versions.

Time for some numbers, based on last week's marketshare and revenue data. I've attached graphs displaying more data, but here is an excerpt:

I was actually surprised there is less difference between non-root and root apps, percentage wise, than I had expected.

As you can see, the global marketshares of Android versions have fairly little to do with their per-app distribution (probably different for Facebook), and even less to do with revenue:

KitKat, though having only a marketshare of just over *5%, is responsible for half* of (my) revenue, while Gingerbread with quadruple the marketshare, is hardly relevant revenue-wise at all

While from an idealistic perspective you should support every Android version you can possibly get to work and still has users; from an economical perspective the benefits have to outweigh the costs - and what you end up doing is usually somewhere in between.

It should be very clear from these numbers that supporting Gingerbread - purely from an economical perspective - may not be a great idea - especially if you're building something new, and considering the hardships of supporting pre-ICS Android versions, some of which I have detailed in my previous post.

While for every app different factors come into play and you have to carefully consider them all - good cases can be made on these numbers to support only very recent Android versions. Supporting only (for example) 4.2+ leaves two thirds of Android users behind, but may cost you less than a quarter of total revenue.

As always, not everything is as it seems. Thanks for reading, and stay tuned for more tales of interest :) 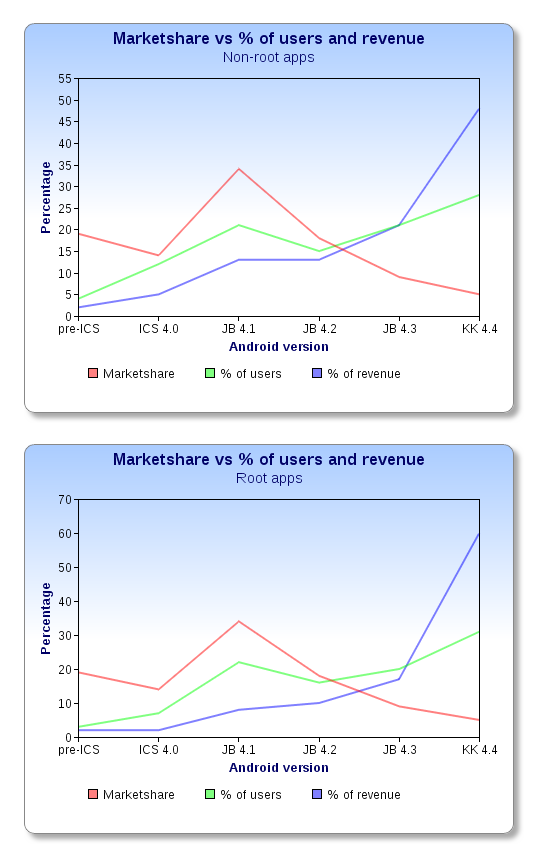 Thank you for this analysis.

The fact that someone hanging on to an old phone is less likely to buy apps, especially the tech-savvy crowd that would favour a chainfire app, should come as no surprise.    It seems obvious, once someone does all the work and points out the facts.  Great post.

+NFG man thanks! One of the reasons of this post is that I make the stated arguments regularly when talking to other devs, but they are often skeptical. Now I can slap them around with these numbers ;)

I would be very interested in seeing how your statistics stack up against the likes of Facebook and such. That is to say, if I was developing an app aimed at "technical" users then your stats show it's hardly worth targeting pre-ICS. However, when developing an app that's aimed at the general population, I wonder if there's still a gulf between GB and ICS+. As someone who wants to start developing apps soon, stuff like that interests me.

That was very interesting and well written. There is another problem with ginger: A dev has to invest way more time in writing such an app because a lot of gui components need fallbacks.

+Steve Donaghy keep in mind that though my following is largely technical, not all of my apps are aimed at tech users, yet those do show more or less the same graphs.

Also keep in mind that Facebook doesn't actually sell apps so that form of revenue isn't important, and that the more technical user in my experience is more willing to pay for an app than the average user ... :)

+Chainfire Again, those are very valid points you've brought up and it goes to show that there's no easy, straightforward answer to what you should and should not support. Facebook is probably not the best example to use, but no doubt it's one of the most ubiquitous.

Back in mid 2012, when I believe ICS was the norm, I bought a brand new tablet, and it still came with 2.3.4 on it.  (It was a Pandigital, so it never got, and even if it were functioning, never would, get updated as they're out of business. After the flash chip gave out (so it wouldn't even boot), I more or less destroyed it just to see what its innards were like.)  So new device !necessarily= new OS, just sayin'.

Today though my inventory is a grouper Nexus 7 with the latest, so no worries from me hanging on to an old OS. :-)

So Chain, essentially your thinking about whether its worth the time to continue developing for Gingerbread?

Great explanation! I've made similar arguments in the past for why I don't write for Gingerbread or below. I've had plenty of people argue about it, but the fact that usually stops most of them in their tracks is when you ultimately point out that the Gingerbread numbers are only going to continue shrinking. Before the end of this year, it's very plausible that Gingerbread will drop below 10% globally (it probably won't, but it will be close).

Just curious your revenue figures add up to over 100‰ (kitkat alone accounts for 108%) am I missing something?

Even cheap phones have Android version 4.1+.

+Brian Bartlett thanks hadn't looked at the graph just the figures. Kind of obvious when it's pointed out

+alun phillips I have a cheap zte valet from tracfone as a backup phone and it has 4.1.1 on it. Older phones that pass the 18 month update support period recommended by Google no longer get updates.

I'm developing only for ice cream sandwich and higher versions. No reason to mess with support libraries to get a few extra noob customers

Those graphs would have been far better as bars instead of lines. And they have different scales.

+Steve Donaghy +Chainfire I would imagine that, although some of your apps are aimed at/ of interest to less technical users, you would still end up with more technical users purchasing them because you are trusted by the tech community; we would pick your app over a similar app by a different dev. Facebook, however, is trusted (or not!) by everybody... Interesting results / post though - everyone I know who buys anything other than versions of angry birds uses at least 4.2 so the above seems pretty credible!

Wow! Let Gingerbread die already! If you have a device that's still running Gingerbread, it's time to upgrade... If you don't want to do that, go "git" YOUR OWN repos and build YOUR OWN roms and mods and let the devs move forward. Nobody likes working backwards. Great point Chainfire! Keep up the great work!

+Ian Tester Sorry, but I disagree - those graphs actually started out as bar graphs, but they didn't get the point across as well, in my opinion.

+Richard Chapman Unfortunately it's impossible to know for sure unless more devs publish more figures like these! But personally I suspect the difference will not be that big.

That's a different way of thinking about apps and app development

I like thwarting those rotten apples with good ol ingenuity! Seems to me that the point hasn't been made that numbers don't lie. More is still more. Thanks for the graphs and all the hard work you do. Techie or not, (which i very much am), i am grateful as hell for your development skills and but too eager to see what's next. Thanks Chainfire. Keep up the hard work and diligent research. People like youare what keeps our devices going and in such demand. Points are pointless if limits aren't limitless. Again, Thank you.

Hello I wish to reset counters to zero on my samsung S5, finds a solution to recover the guarantee?

Yes thank you very much.

As said earlier, numbers don't lie. Great points by all. Keep up the good work.

This post is over a month old, commenting has been disabled.